Last I left off, an ambitious group of kids had solved this question (that they asked themselves):

That was in the pursuit of this other, much larger goal (another that they developed themselves):

So for these students, this became a challenge of going from specific to general – a huge theme in any algebra class – and rearranging the formulas to suit their needs. As their teacher, I felt obligated to read through and try to comprehend everything they did, but I’ll admit, this was the point where I mostly just tipped my cap and marveled at the final products that these 9th GRADERS (!) produced, which I’ll share below: 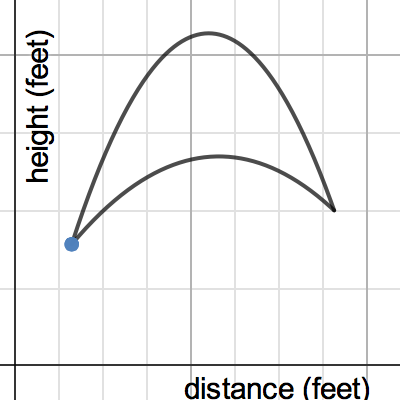 1. A Desmos graph that asks you to choose any launch point, any landing point and any initial launch velocity, and it will show you the exact possible path(s) of your projectile. Oh, and you can press play and see a simulation that uses a parametric equation. 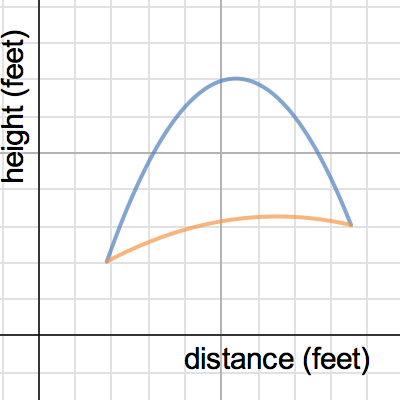 2. A Desmos graph, taking the same inputs as above, that will tell you the angles of launch required to meet your exact criteria (complete with a step-by-step explanation of the formula’s derivation, added at the bottom of this post). 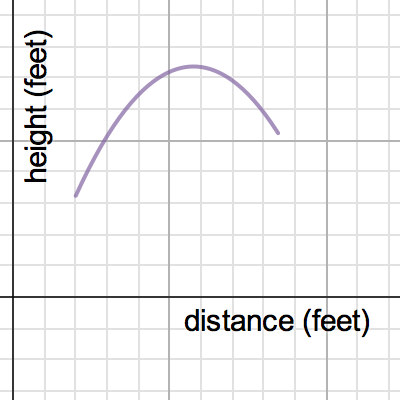 3. A Desmos graph that asks you to choose any launch point, any landing point and the desired time you’d like the projectile to be in flight. It will tell you the launch angle and initial velocity necessary to meet the criteria, and show you the flight path.

This was a massive success story for these kids, and now – months later – I’m still deconstructing why this project was such a hit for them. In the course of writing these blog posts, I’m realizing that the success was the perfect coming-together of a bunch of factors:

It may be a while before I get students capable of this kind of work again, but most of the bullet points above are within my control. I plan on spending the foreseeable future trying to make a perfect storm like this happen again.

Students’ step-by-step explanation for the formula in Graph 2: