About 18 months ago, I hung up my teaching shoes and became a “Teacher on Special Assignment” for my charter school network. I’ve found it challenging to describe what exactly the “special assignment” is to friends, family, and colleagues. In short, I am leading an 18-month-long-and-counting effort to transform our network’s approach to math curriculum, instruction, and assessment. Most people in our organization, when asked what my job is, will give you a much simpler answer (with varying degrees of sarcasm): fix math. Whatever we’re calling it, it’s been an incredible challenge and epic professional adventure that I’m long overdue to blog about. Over the next few weeks, I’m going to chronicle the twists and turns. Most importantly, I plan to share my learnings that will hopefully benefit others wrestling with similar challenges. Let’s start at the beginning:

Back in 2013, my organization shifted to project-based learning (PBL) in all courses, for all grades. I viewed this as an exciting shift at the time. Even upon reflection, teaching in that model changed my instruction for the better in many ways (many of which I’ve written about on this blog): kids were reading and writing lots; math practices and cognitive skills (aka 21st century skills) became more of a focus in my classroom; students with vastly different math proficiencies collaborated meaningfully; and kids produced awesome final products that they (and their parents) were proud of. Over three years later, I still get random emails from former students recalling a project we did that was meaningful to them and has stuck with them.

The shift to PBL had challenging aspects, too; often very fun challenges. When my 9th grade students were doing their Projectile Motion projects, for example, they were unsatisfied with the constraints I gave (limiting study to objects launched straight up or down, so as to work with a standard quadratic function). They were curious how to model projectiles launched at an angle, and – not knowing much about physics myself – I was curious too! That curiosity led me and the students on a thrilling, unexpected mathematical journey. 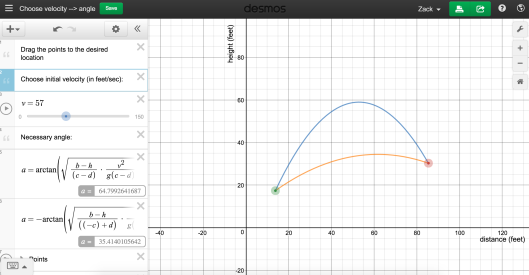 Some of the challenges involved in our PBL-shift, though, led me to the conclusion that something still wasn’t quite right with how we were structuring our math classes. At the time, Geoff Krall’s writing about being in a similar position resonated with me and my experience. Here’s how:

Reading Common Core’s definition of rigor further convinced me that we shouldn’t limit ourselves to doing only projects in the math classroom. The definition refers to procedural fluency, conceptual understanding, and application. Projects gave us the application component, and my school also had a system for procedural fluency, but conceptual understanding got the short end.

I believed that to provide a more rigorous classroom as defined by Common Core and others, especially one that gave sufficient emphasis to conceptual understanding, we needed a combination of project- and problem-based experiences in our math classes. I decided that this effort would be my “special assignment.” Making that decision was the first domino that has set the wild past 18 months in motion. I’m excited to share more; stay tuned.

10 thoughts on “Transforming a Math Program, Pt. 1: A simple change…”